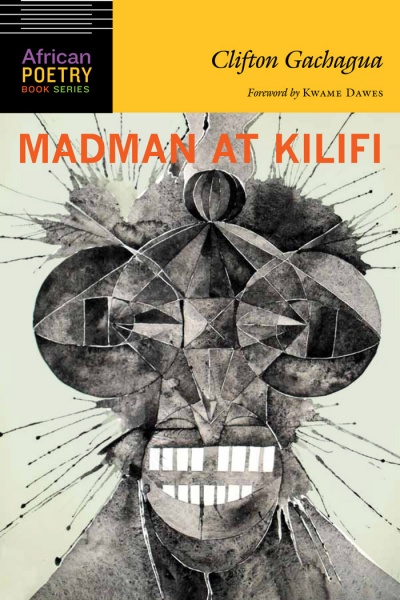 Clifton Gachagua’s collection Madman at Kilifi, winner of the Sillerman First Book Prize for African Poets, concerns itself with the immediacy of cultures in flux, cybercommunication and the language of consumerism, polyglot politics and intrigue, sexual ambivalence and studied whimsy, and the mind of a sensitive, intelligent, and curious poet who stands in the midst of it all.

Gachagua’s is a world fully grounded in the postmodern Kenyan cultural cauldron, a world in which people speak with “satellite mouths” with bodies that are “singing machines,” and in which the most we can do is “collide against each other.” Here light is graceful, and we glow like undiscovered galaxies and shifting matter. And here as well, we find new expression in a poetry that moves as we do.

“The judges of the first Sillerman First Book Prize for African Poets have agreed that, without a doubt, we are experiencing in this book the opening noises of a poet who will make a great deal of important noise in the future.”—from the foreword by Kwame Dawes

From Clifton Gachagua’s poem “A slow boat to China”

“The trip begins in a landlocked country with a navy and old sea captains,
geologists and dark men who speak quick Arabic.
Where is she? On a slow boat to China with her braids floating
on salt water. The country used to have a port before secession.
Next to her is a man who either carries all his money in a leather pouch
or keeps it buried at home.”

Clifton Gachagua is a screenwriter, filmmaker, and translator based in Nairobi. His poetry has appeared in Saraba and Kwani? 06